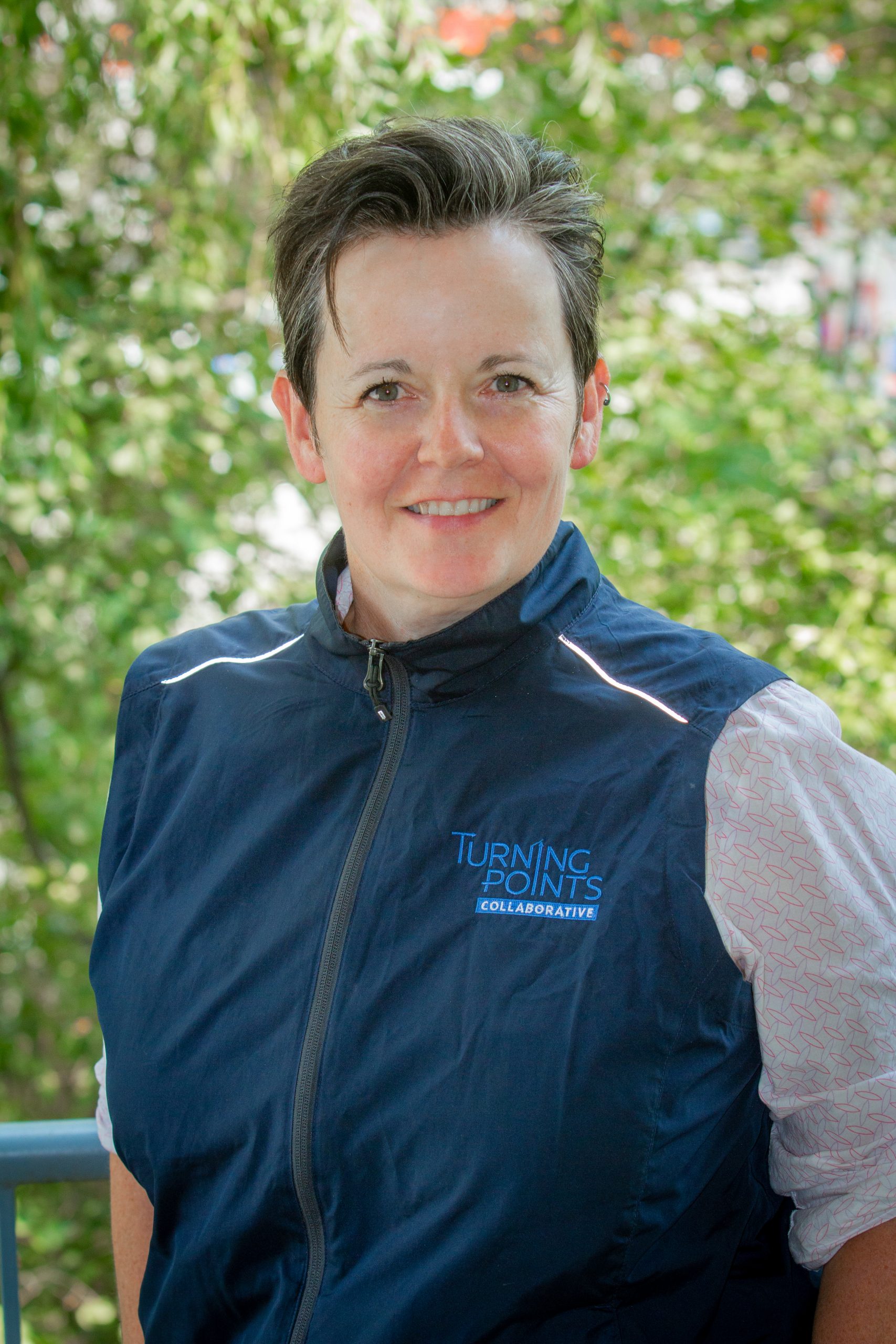 Randene has been the Executive Director of Turning Points since 2017. Under her leadership, the organization has grown in both staff and programs offered.

Randene is deeply committed to collaboration and community building and has created strong connections in new comminities. As such, she sits on numerous community committees and working groups spanning several communities, ministries, and multiple layers of government.

For the past twenty-two years. Randene has worked in roles supporting and championing marginalized individuals within the Federal and Provincial governments. She’s worked as an executive director for a number of organizations in Canada and internationally (India). She worked in Northern BC for fifteen years and during that time she had the opportunity to work and develop relationships with numerous indigenous bands; from the Haida of the north coast to the Lheidli  T’enneh of the central interior.

Randene has a Master’s in Social Work and a Master’s in Business Administration. Both degrees were focused on non-profit leadership. She’s also recently been accepted into an executive leadership program at the prestigious Wharton School of Business.

Randene describes her experience growing up in Enderby as a member of the LGTBQ2S+ community and tragically losing a loved one to suicide as experiences that have changed her forever. She has a deep and profound personal understanding of trauma, mental unwellness, and marginalization as a result. 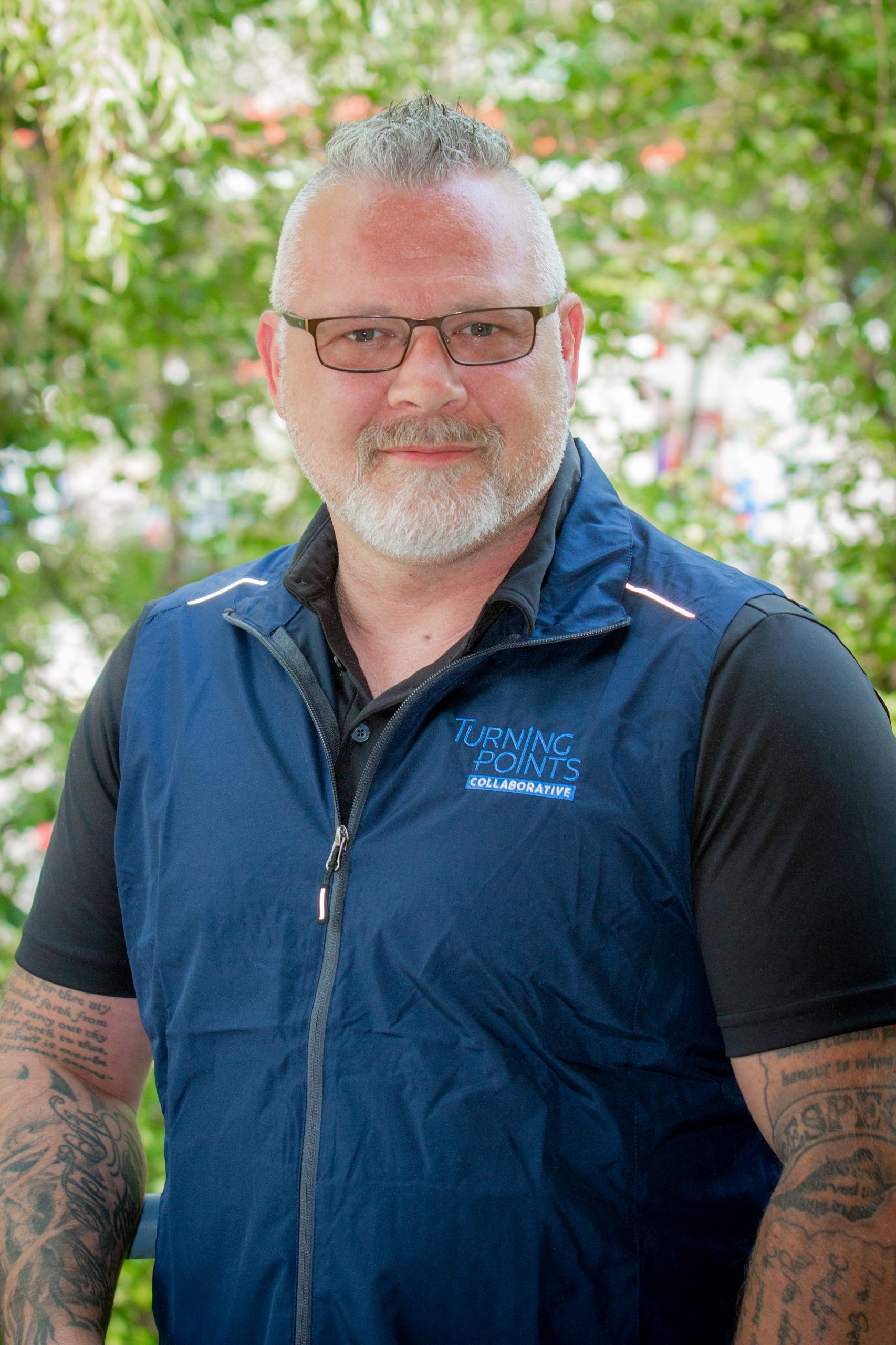 In both employment and governance roles, Kelly has developed, monitored and grown programming. He’s partnered with other non-profits and government agencies to develop a variety of public safety and community development programs in the areas of substance use and harm reduction, shelter and housing, employment, outreach services, media and communications, human resources, quality assurance, and best practices.

He is a person in long-term recovery. His lived experience sees him on an ongoing journey of self-discovery and reflection. What’s more, he’s mindfully chosen to use his experience to help others through the pursuit of a career in health and social services. 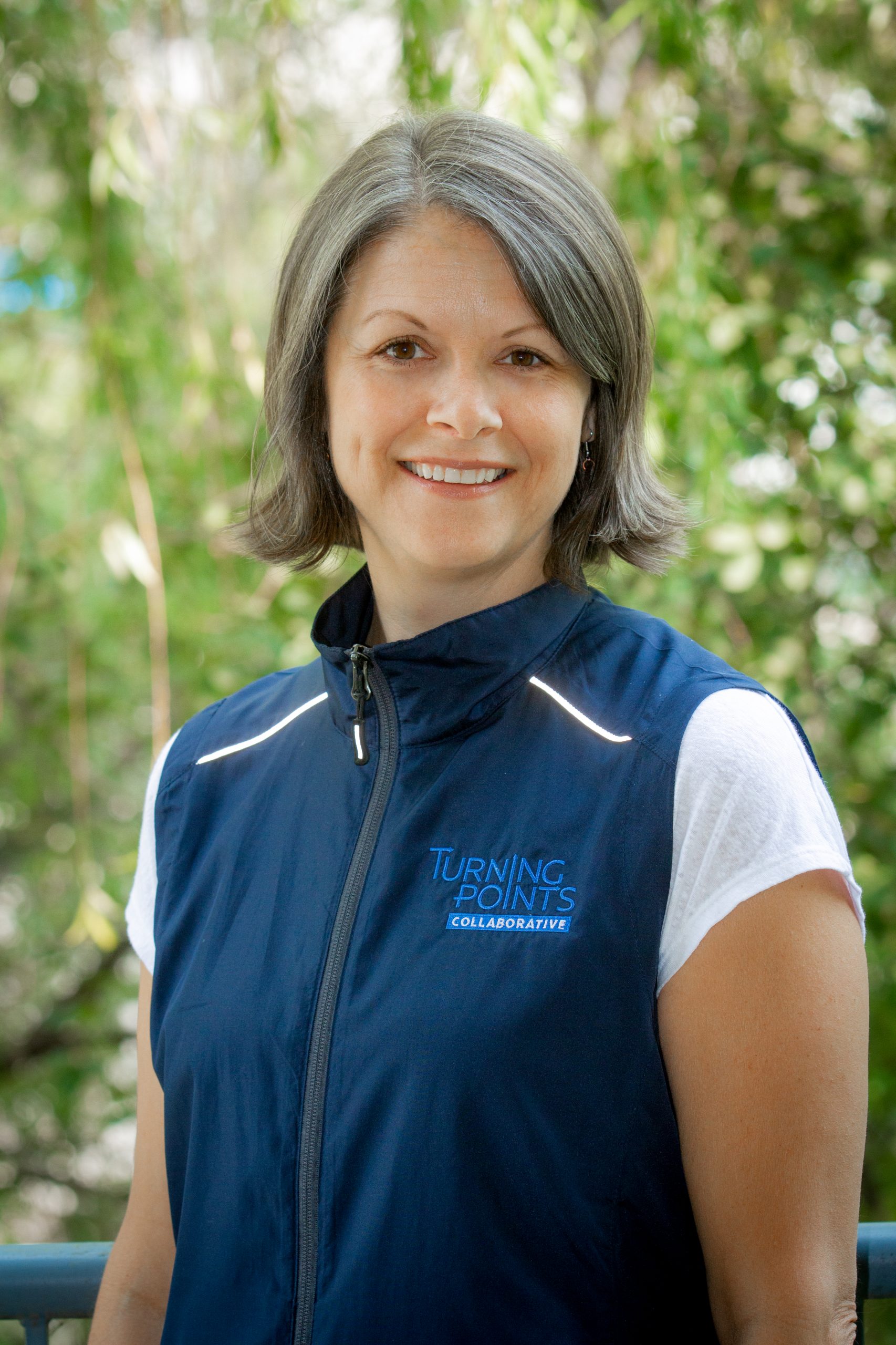 Lisa began her career with Turning Points Collaborative Society in August 2018 as Site Manager for the Gateway Shelter & Temporary Winter Shelter Programs. She was promoted to her current role as Director of Human Resources in 2020.

In her role as Director of Human Resources, Lisa is committed to creating an environment where employees and program participants feel supported and encouraged. She focuses on recruiting and developing teams within the organization – with an emphasis on growth management, diversity, and organizational culture.

Lisa has over six years of experience in the social services sector and over twenty years in leadership, administration, and human resources. Prior to working with Turning Points, Lisa was the Co-Executive Director for the Vernon Upper Room Mission Society, a local non-profit organization that provides meals and outreach services for the community’s most vulnerable and marginalized populations. Active in her community, Lisa is a member of Kalamalka Rotary, participates in many community committees and has volunteered many hours for local non-profits.

Lisa’s experiences in childhood and as a youth has helped her identify with the shame and stigma felt by many of the people who access Turning Points’ services. 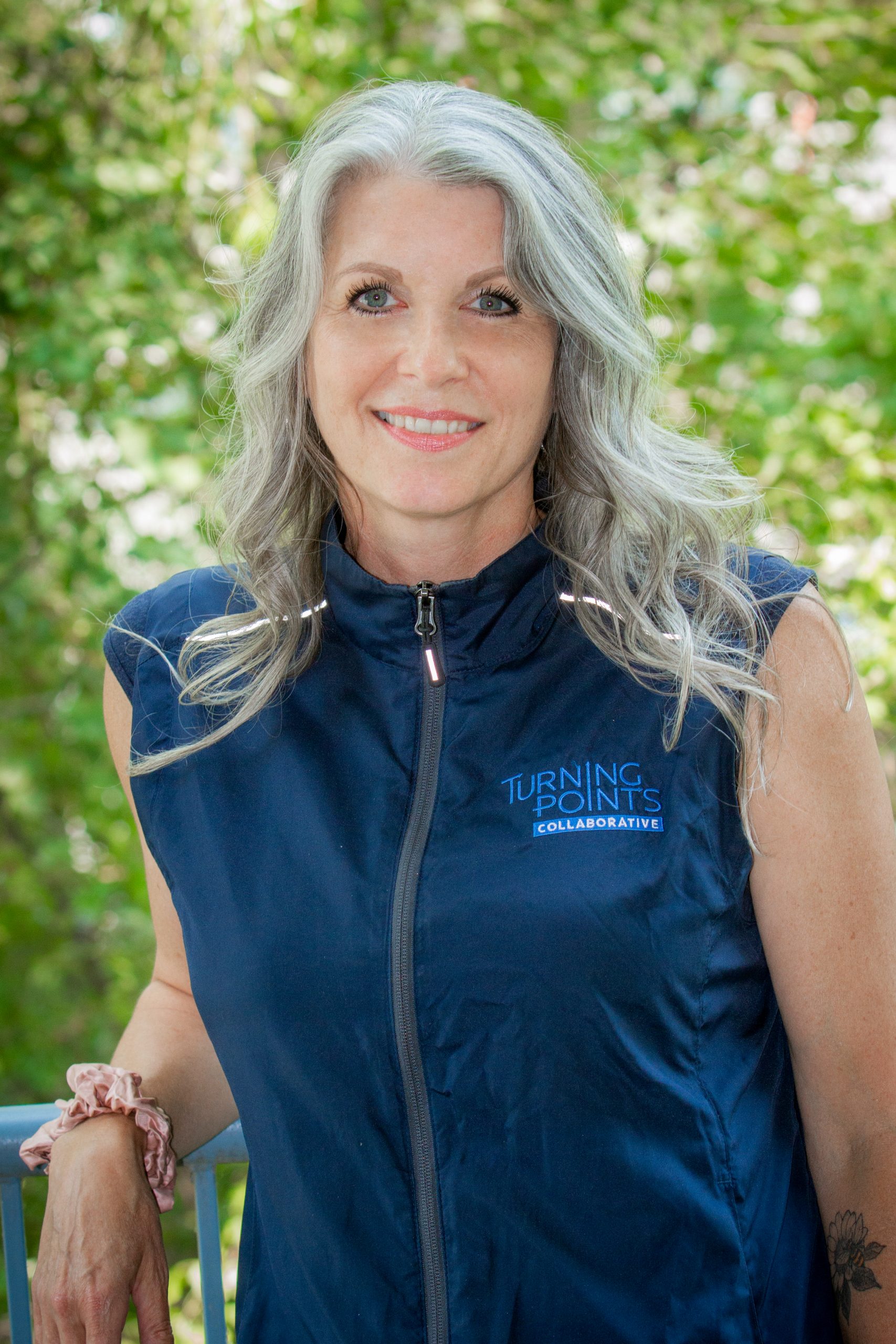 Shelley has been with Turning Points since April 2010 and has held many positions within the organization. She oversees all of our housing programs and sites.

Promoting the Housing First Model and supportive housing philosophy are true passions for Shelley, and a highlight of her career has been making a connection with and receiving advice and mentorship from Dr. Sam Tsemberis, who is known as the “Godfather of Housing First.”

In 2014, Shelley completed the Rental Property Management License Program through the UBC Saunder School of Business and managed several market properties in the community. This experience allowed her to gain an in-depth knowledge of the Residential Tenancy Act and regulations and to further develop her tenant relations and property management skills.

She is currently enrolled in the Non-Profit Management Certificate Program at Simon Fraser University. This program has expanded her knowledge of strategic planning, human resources, project management, diversity and inclusion, and financial management in relation to the Non-Profit sector.

Shelley saw an immediate family member through the darkness of addiction and into the light of recovery. That journey gave her completely new insight and understanding of the long-lasting effects of trauma. Seeing things through a familial lens has also reinforced her desire to advocate for supportive housing where individuals can enjoy the sense of community, connection, and belonging that is imperative for true healing and personal growth regardless of their past or present experiences. 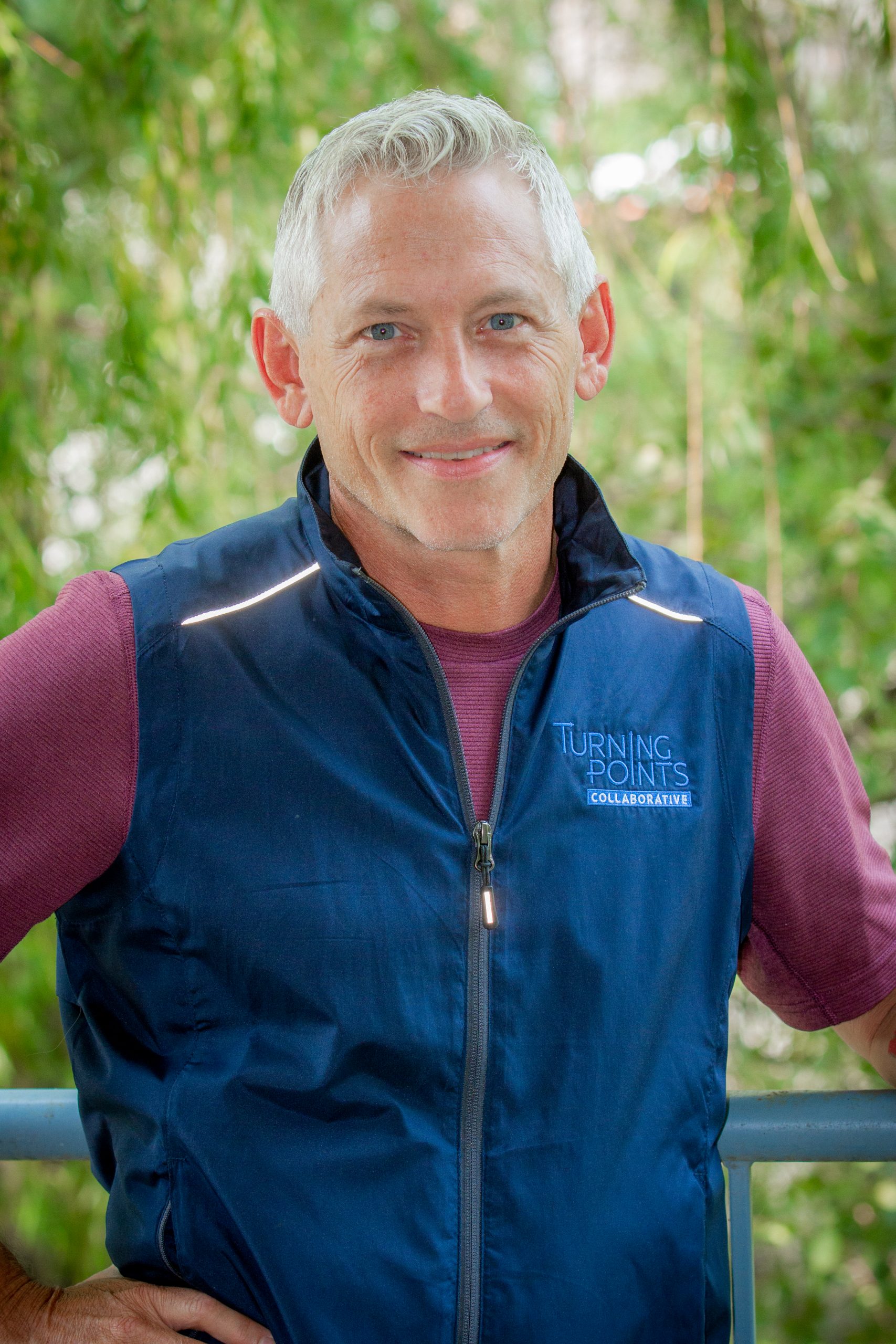 Brad came on board the Turning Points Collaborative Society team as a Residential Worker in 2011 and was soon promoted to Manager of Addiction Services. He has been pivotal in developing our Addictions Services program. Brad began his current role as Director of Addiction Services, in 2020. Brad leads a strong and qualified team while bringing hope, healing, and wellness to folks who are struggling.

Brad has a background in education. He graduated with a Bachelor’s degree in 1990 and spent 13 years working with students and families. While pursuing his education, an opportunity came up to work with marginalized at-risk youth in Regina. Because of his education and experience, he was given the status of Social Service Worker level 1.

His career working with students and families brought him to Vernon in July 1999. In 2003 he became a board-certified Addiction Interventionist and from 2006 to 2008 he was the Executive Director of an intensive outpatient program called Alpine Ridge Recovery Centre.

Brad is a person in long-term recovery and has been for the past 20 years. This lived experience has opened many doors and has led him on an incredible journey of wellness. 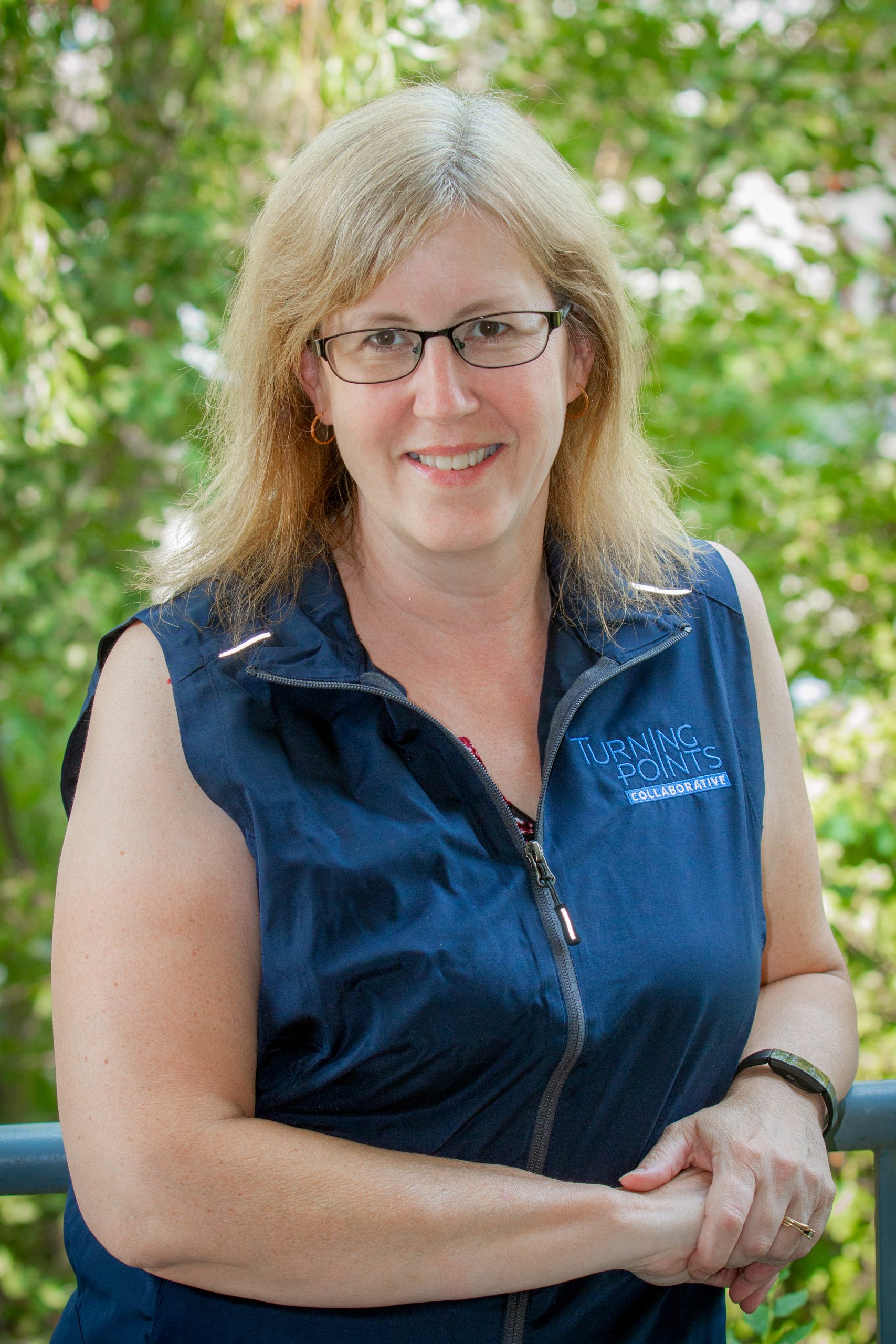 Michele has been with Turning Points since 2019. As Controller, she oversees the Finance, Payroll and Administration teams.

Michele’s been a Certified Professional Accountant (CPA) since 2003 and has spent more than twenty years working as a finance leader, primarily in the forest and manufacturing industries.

She has always been active in the community through groups like Rotaract and the Junior Chamber of Commerce, and she sat on the board of the North Okanagan Community Living Society for three years. Michele currently keeps busy assisting with her own family’s distribution business and her two teenagers. 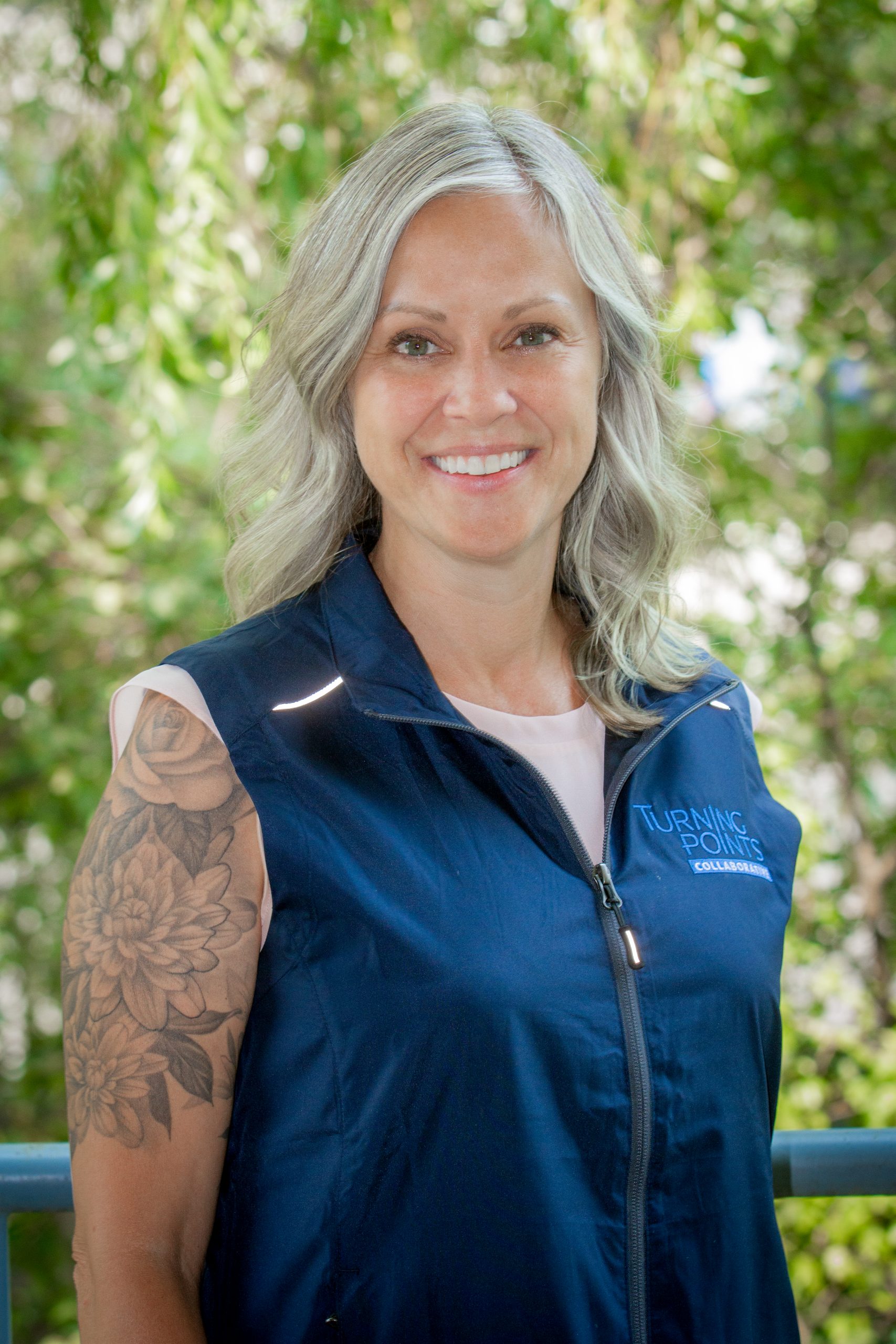 Regional Director of the Southern Interior

Tara graduated with a Bachelor of Arts in International Relations and Community Development. Her career saw her working first in government, then in the non-profit sector, then in the private sector, before cycling back to her passion for the non-profit world.

Tara grew up and lived her young adult life in Victora, BC. She moved to Kelowna in 2009 after years of living and travelling abroad.

Tara is the proud mother of two teenage boys. In addition to her work with Turning Points, she sits on the Central Okanagan Refugee Committee and operates a small business that builds attainably priced homes in Kelowna, BC. 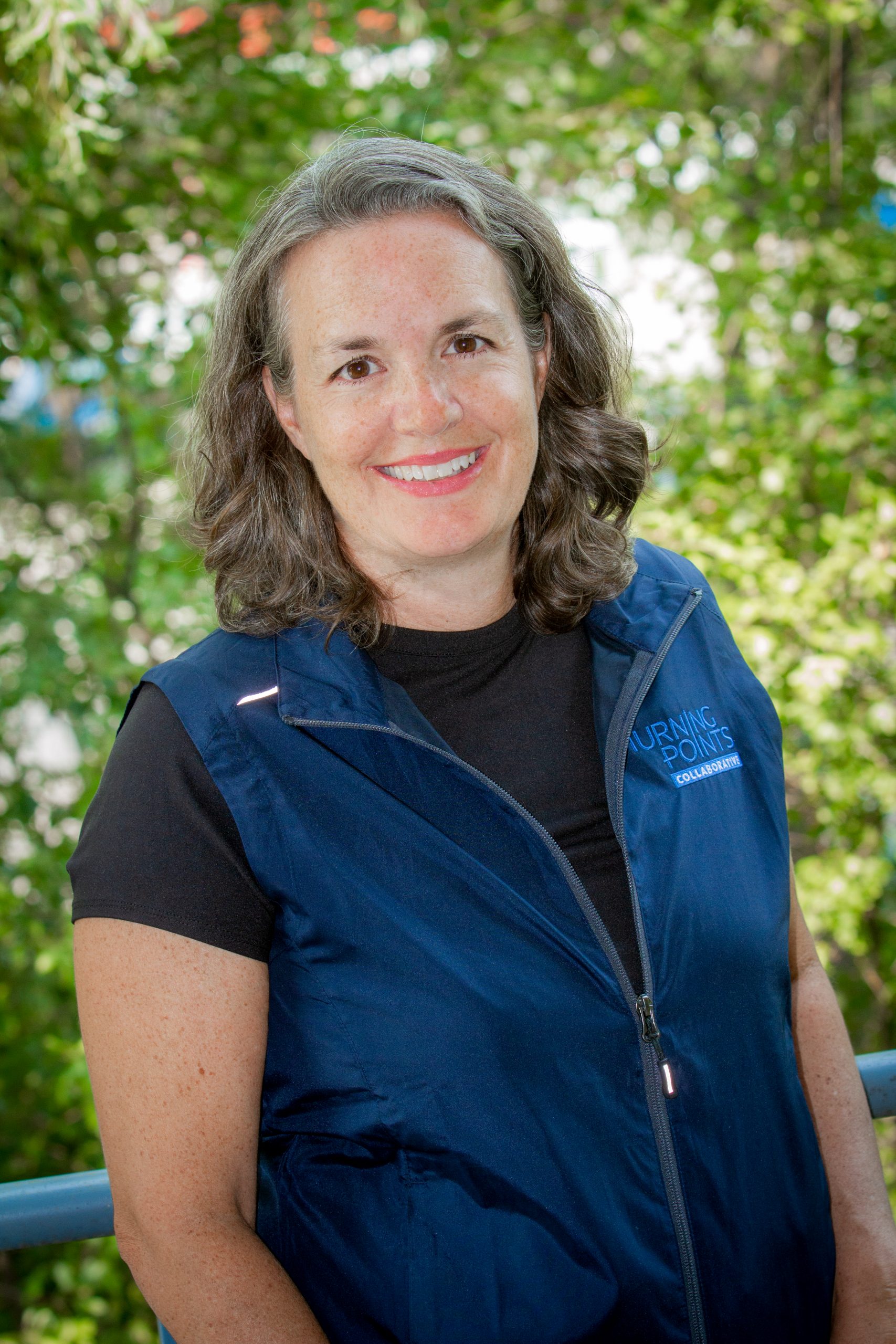 Laurie began working at Turning Points in 2021. She’s currently the Director of Communications.

Laurie brings 30 years of experience to Turning Points from a variety of roles in film, television, and corporate communications. Throughout that time, Laurie was entrenched within the communications strategies for numerous organizations, government agencies, and production companies. Laurie’s experience in creative industries in the for-profit sector has given her a unique perspective, valuable insight, and a distinct voice. Moreover, the diversity of her experiences has shaped her communications philosophy.

Laurie spent many years producing content in Vancouver’s very busy production market, creating television series and documentaries for CBC, CTV, Corus, Netflix and more. But perhaps her most rewarding work has come from 20+ years of producing, writing, and co-directing films for a New Westminister-based NGO. Together with a small team of professionals who volunteer their time, they have created breathtaking and emotional films (all over the world) to raise millions of dollars for the poor.

Despite the critical acclaim of her projects and the allure of the television industry, in 2021, Laurie was compelled to move “back home” to the Okanagan after 30 years. She is thrilled to have found an avenue to put her skills to work in an important way. 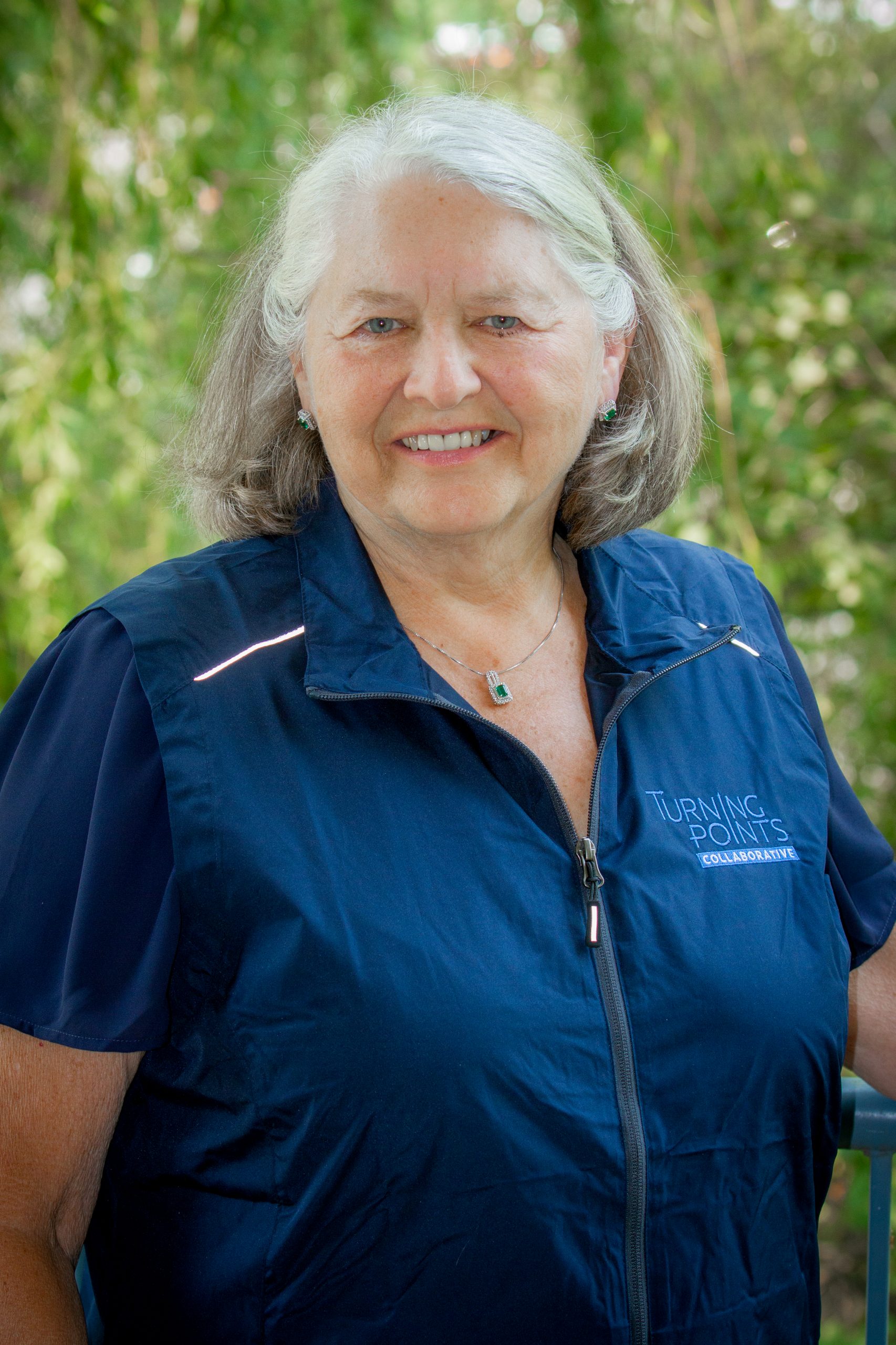 Betty Lee began working for Turning Points in 2010. Her first role with the organization was Controller. When she retired from the role in 2019, she decided to stay on as an Executive Assistant. In this role, Betty Lee is a Jill of all Trades, tapping into her experience and institutional knowledge of the organization to help out with a bit of everything.

Betty Lee brings a wealth of experience and education to Turning Points. She has a Master’s in Business Administration and was a Chartered Professional Accountant and Certified General Accountant for 30 years. Before working with Turning Points, Betty Lee spent 40 years working in the finance departments of hospitals and regional health authorities.

Betty Lee is passionate about her work with Turning Points. She enjoys working in a non-profit environment and is dedicated to giving back to her community. 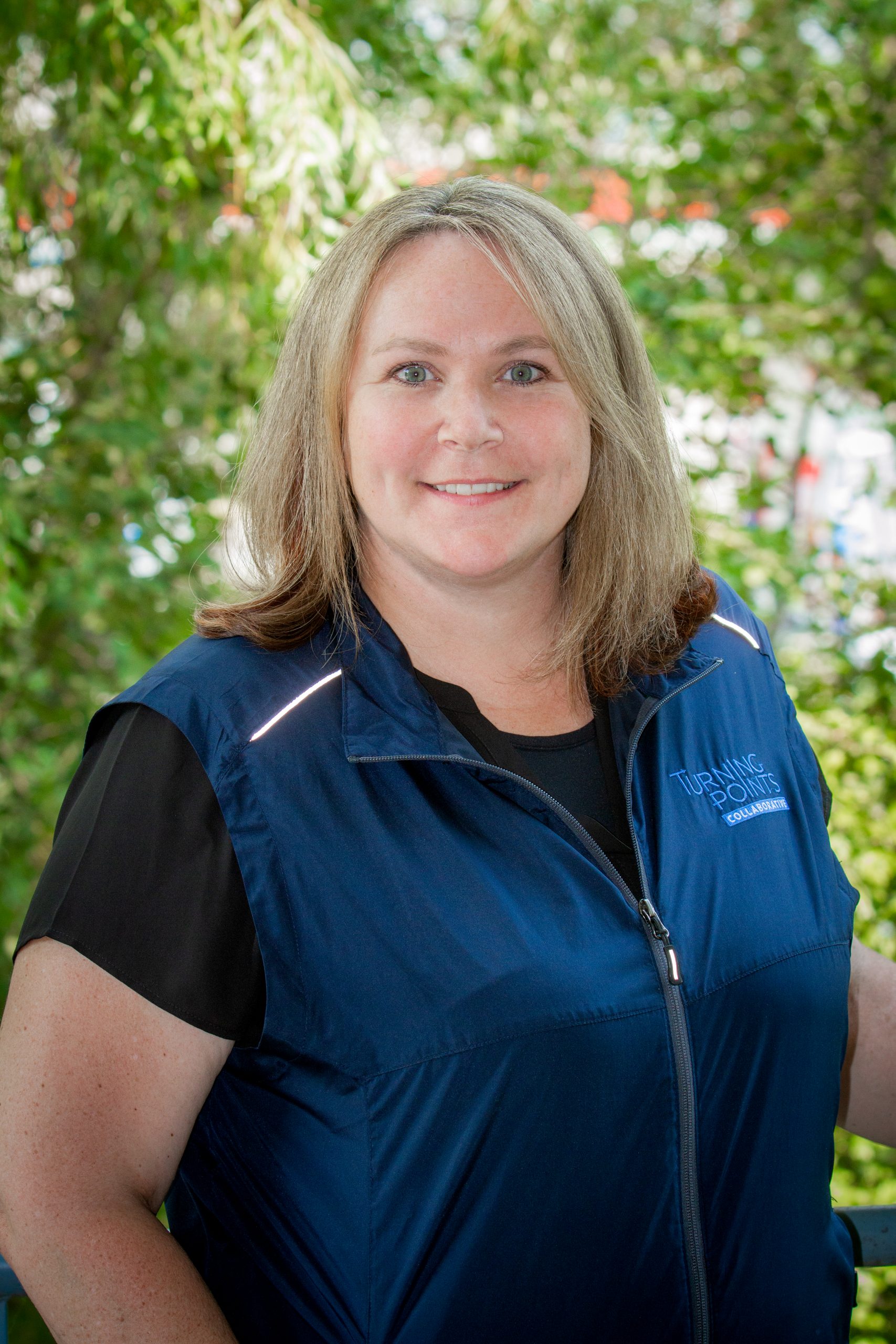 Brandy began working with Turning Points in 2018. Her first role with the organization was as a Residential Worker in shelter and supportive housing, she later became the Site Manager of Turning Points’ COVID-19 Response Motel Programs and housing program in Vernon, and she’s currently the Manager of Education & Community Programs.

Brandy’s background is in Nursing. She became a nurse in 2008, and it was then that she began working with vulnerable adults who had compromised physical and mental health. She finds deep meaning in her work with the community’s most vulnerable and marginalized individuals.

Brandy has seen loved ones struggle with addiction and homelessness and those experiences have helped her to relate to the individuals she serves. She is passionate about the work Turning Points does every day to help bring awareness and end the stigma associated with homelessness.